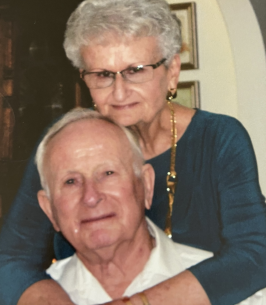 Kenneth Dean Park was born to Charles E. and Victoria Rachel (Rae) Park in Kansas on the first day of spring, March 20, 1927. He was the third of five children.

From an early age, he worked on the family farm, and after the family moved to town, Ken broadened his skills doing all the jobs necessary to run the family grocery store.

In 1947, he got the opportunity to see the world courtesy of the U.S. Navy. The Philippines, Guam, and Hawaii were a long way away for this Kansas boy. He came home from the service with nary a tattoo and decided to stay in Long Beach, California.

It was there he met the love of his life, a cute high school junior named Mary Jo Coppinger. Their first date was a success, except for the part where he wound up in jail. As the only adult in a group that included underage girls and beer, Ken was the one the police took away.

In spite of Ken’s brush with the law, he and Mary Jo married on January, 27, 1951 and lived in Paramount, CA. They scrimped and saved to buy their first home for $9,999 in Long Beach. Their children, Michael and Kathleen were born while they lived in the Long Beach home. He supported his family as a manager for Smart and Final and later, Nehi Beverage Company. After working hard all day, Ken attended night school and entered the Sheet Metal apprentice program.

Once he joined the Sheet Metal Workers Union, he and Mary Jo had a more comfortable life. In 1963, Ken dragged Mary Jo kicking and screaming out to the boondocks that was Orange, California. There they purchased a brand new 3 bedroom, 2 bath home that he and Mary Jo lived in for rest of his life.

Summer family vacations were spent camping in Sequoia National Park, a road trip to St. Louis, and another to the Southwest to see the Grand Canyon, Mesa Verde, and Carlsbad Caverns.

Ken and Mary Jo enjoyed the mountains and built a cabin in Idyllwild, which was setting for many family get togethers. They achieved the American Dream.

Once Ken retired, he and Mary Jo toured the U.S. on a 3-week road trip in a red Mercury Cougar. Later, they explored the world by visiting the British Isles, including Ireland, Australia, and several cruises around Europe, through Canada and New England, and around the Caribbean. They made many lifelong friends on these trips.

Ken expertly supervised the year-long construction of his daughter’s ocean view home in Laguna Beach, an endeavor he was especially proud of.

Ken leaves behind his beloved wife of 71 years, Mary Jo; their son Michael, (and wife, Vickie); their daughter, Kathleen; and their grandchildren, Shannon Park, Kelsey Long, (and husband, Bryan), and Andrew Balcof.