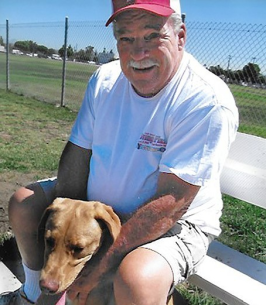 “A father is neither an anchor to hold us back, nor a sail to take us there, but a guiding light whose loves shows us the way.” -Anonymous

On Thursday, May 19th 2022, our family lost its greatest pillar, when beloved father, grandfather, and great-grandfather, Mr. Richard L. Swingen departed this life for to the gates of heaven after a long battle with COPD.

Richard was born on September 15th, 1945 in North Dakota to Robert and Corinne Swingen. As a young boy he enjoyed playing hockey during the cold winters, and running around with his siblings Glenn, Don and Marguerite. Richard graduated from high school in 1963 and headed out west to make California his permanent home.

Richard was a proud veteran of the Vietnam War, where he served honorably in the U.S. Army, achieving the rank of Specialist. He was drafted on March 16th 1968, and headed to Basic Combat Training and Advanced Individual Training at the U.S. Army Maneuver Center of Excellence at Fort Benning, GA. He graduated from the School of Infantry as an Infantry Radio Mechanic (31B-20) and was later stationed at Fort Carson, Colorado before he answered the call to deploy to Vietnam. He was attached to the Alpha Battery, 6th Battalion, 21st Field Artillery Regiment, Fifth U.S. Army which took part in the Defense and Tet Counteroffensive between the years of 1967-1970. He was awarded the National Defense Service Medal, the Vietnam Service Medal with a Bronze Service Star, a Good Conduct Medal, and the Vietnam Campaign Medal. After almost 3 years of active-duty service, Richard was honorably discharged on March 15th 1972.

After returning home from the war, he met his sweetheart Ann in 1972 while working at Laura Scudders. After 6 months of courtship, Richard knew Ann was the one for him. They married on March 30th, 1973 in Las Vegas, Nevada. He made a home for his newfound family in Garden Grove where daughters Beverly and Donna, have fond memories of their adolescence. When the girls were in high school, Richard always made it a point to take the family to the school football games. Afterwards, he would take his daughters to Del Taco so they could hang out with their high school friends and pick them up when it was time to go home. He was the kind of father, that you could always rely on to take care of you when you needed it most no matter the time of day.

In his later years, Richard enjoyed spending time with his grandchildren, going to car shows, and taking his beloved sidekick Buddy to the dog park. As a lifelong hockey and baseball fan, he became a season ticket holder to the Anaheim Ducks and Angels Baseball team. His happiest moments were at the ballpark and hockey arena, where he’d cheer on his team with his wife or grandchildren by his side. A devoted family man, Richard attended every single one of his children and grandchildren’s theater performances, graduations or sporting events. A feisty and spirited man, he was his children’s greatest champion and always encouraged them to look fear in the eye and stand up for what they believed in. No obstacle was too insurmountable for him to tackle.

Richard is survived by his loving wife of 49 years, Mrs. Ann Swingen, his two daughters; Beverly and Donna, his three grandchildren; Michelle, Michael, and Mary-Briana, and his three great-grandchildren; Mason, Merrick, and Macklin.

Though your time on this earth has come to end far too soon, the footprints you have left on our lives have been imprinted in our hearts forever.